Last time on The Injury Report, we looked at ankle sprains, one of the most common injuries in sport. Today, we take a brief look at muscle contusions, another common injury in contact sports.

We'll look at what exactly they are and how they occur, what the best way is to manage them in the first instance, and how to ensure they don't keep you out for longer than absolutely necessary.

Muscle contusion. Corky. Whatever it is you call them, they can be one of the more annoying injuries to sustain. Something common in contact sports, they manage to leave even the biggest and strongest hobbling around in pain.

But what exactly is going on with them and how do we best manage them? 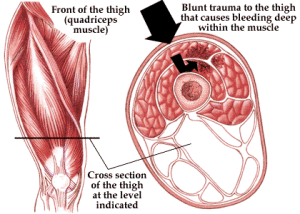 In order to answer that, we need to define what exactly we're dealing with. A ‘cork’, or muscle contusion, is usually sustained through a direct blow to the soft tissue. This results in damage to the capillaries (small blood vessels) within the muscle, resulting in localised bleeding. The more forceful the impact, the more bleeding there is.

Receiving a knee to the thigh or calf is usually the most common way to sustain a contusion injury, neither of which is overly pleasant (I’ve had both, and I’d have to say that the thigh is perhaps the most debilitating. Try getting out of the car or off the toilet the next day!).

Despite the severity of pain, contusions don’t usually result in any significant muscle damage, unlike a tear. Due to the bleeding, the muscle becomes more difficult to contract or stretch, limiting its use.

A haematoma occurs when this bleeding accumulates in an area of tissue. It can be localised in one spot, or spread throughout the muscle tissue.

This would be no surprise to anyone who has sustained one before, but the symptoms of a haematoma generally include:

In the acute stage, if the injury happens mid-game and isn't particularly severe, people will generally find they are able to continue playing provided they stay warm (their muscles, not by wearing a jumper). It’s when they stop that it becomes a problem. Having said this, with more severe contusions, continuing to play can increase the bleeding, which may increase the recovery time afterwards(2).

The general rules of acute injury management apply well to contusions. Resting from activity, along with ice, compression and elevation are most beneficial in first 48 hours. This will help to limit bleeding and further progression of the injury and begin recovery. Gentle movement of the limb can be a good idea to avoid it becoming too stiff. Avoid the urge to have massage performed on the affected area this early. While this may result in some short-term relief, in these early stages it will only serve to stimulate the bleeding.

If you are consulting with a massage therapist, they'd be well aware of this.

Save it for later.

After the initial Injury

Once you are through this acute phase, the most important thing is to get it moving. Some gentle active exercise such as walking or using the stationary bike can be useful to get the muscle working, while also promoting the flow of blood from the area as the haematoma starts to resolve.

Gradual return to sport specific tasks like running is then a good idea, gradually building speed and power as pain allows. It is at this point that some gentle soft tissue therapy like massage can be useful to promote ongoing recovery. Be gentle though, there’s no need to try and bludgeon it into feeling better. Sometimes alternating heat and ice can help the capillaries dilate and constrict, promoting blood flow. Alternating every 5 minutes or so a few times is the simplest way to go.

Due to the good blood supply that muscles have, they tend to heal well. To fully resolve, contusions normally take around 2-3 weeks depending on their severity. A mild contusion can take around 13 days, a moderate one around 19 days, and more severe cases a little over 21 days(3).

Can it get worse?

In a small percentage of cases, severe haematomas can develop into more limiting conditions. These can include compartment syndrome(4), which is severe swelling inside the muscle compartment, or myositis ossificans. Myositis ossificans occurs in roughly 10% of haematoma cases(5), normally following muscle tear with significant bleeding or severe contusion. The condition is causes by the haematoma calcifying, causing the tissue to harden. It is usually significantly tender, and the hard tissue can be felt in the muscle. These can usually be seen with scans at around 3-6 weeks after the injury. Longer rest and gentle rehabilitation is usually required.

Contusion injuries are very common in contact sports, but can happen in any situation where blunt force trauma to a muscle can be sustained. They normally recover well and rehab is simple, provided it is managed right at the start. So don't ignore it, look after it, and be back on the field sooner.

Points to take away:

Knowing the Road Ahead